House Rule: Torches Shall Be Consumed! 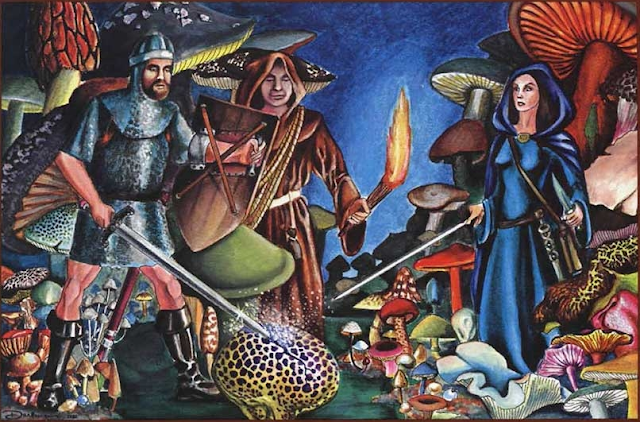 I've always considered timekeeping pretty annoying in old-school gaming: keeping track of turn-based spells' duration, shifting from rounds to turns or the consumption time of a torch have always been a burning thorn in my dark hole.

With this post I just wanna focus on torches, because in the past - as a DM and also as a player - my gaming groups have always neglected their durability while exploring multi-layered dungeons.

This HR handles this in a very simple way, with a 4+ roll and the use of the so called dice chain (i.e. scaling from a die to another die with less faces): as long as a torchbearer rolls 4+ the torch consumes regularly, otherwise it consumes faster.

The torch will stay lit until the torchbearer fails the roll with the d4, causing the torch to exhaust definitively.
Pubblicato da Hamel™ a 03:08 6 commenti

Ten Commandments Sword in the Stone

The original Ten Commandments Sword is a shapechanging sword created by the mangaka Hiro Mashima in his fantasy manga Rave, able to take the form of ten different powerful swords: my purpose is to blend this concept with King Arthur's famous sword in the stone, turning the TCS into an artifact for D&D/AD&D.

Long time ago, an ancient Evil wreaked havoc in the known world: nations have been wasted, innocents have been sacrificed, fear and terror ruled above all.

In the deepest darkness, the beacon of Hope was enlighted by ten heroes.
A harsh warrior from the North, trusting the power of his sword.
A reckless boy, always risking his life for the sake of Good.
An elf from the Emerald Forest of Elves, as fast as lightining.
A warlock, master of forbidden secrets.
A swordmaster, with a blazing heart and a cold mind.
A brave woman, striking his foes like a whirlwind.
A huge knight, able to withstand alone the strongest giant.
A mysterious man, harbinger of the Power of Light.
A merciless swordman, possessed in battle by a bloodlust frenzy.
A man of faith, fighting in the name of Justice.

The power of Ten defeated the Evil, bringing peace back in the known world.
Nine of Ten perished during the battle, only survivor was the warlock.
Ten Swords became One, with warlock's last magic.
Plunged in the Stone of Oath, the One will grant his power to chosen one.


The Sword of Oath looks like a slightly rusty blade stuck in an obsidian decagonal stone, but it owns amazing powers: in the hands of the chosen one, it will grant him the power of one of the then heroes.
Roll 1d10 to determine which form the sword will assume.

1 - Eisenmeteor
This massive +2 great sword allows its user to overcome any sort of damage immunity (like vampire's or lycanthrope's) from non-magical weapons against a physical target; it can't be affected by spells targeting magic weapons.

2 - Explosion
Everytime this +2 long sword deals maximum damage, it engulfs a 5ft. area around its user with an explosion: doing so it deals 1d8 bonus damage to every adjacent opponent and 1d3 damage to the user.

3 - Silfarion
This +2 long sword is weightless, and it works exactly like a pair of Boots of Speed.

5 - Blue Crimson
One sword is coated by small flames, the other releases small shards of ice.
Whenever the user attacks with these +2 long swords he rolles 2d8 for damage and drops the lowest (coounting thus as a single attack), choosing on the moment if dealing fire damage or cold damage.

6 - Mel Force
This +2 long sword whistles everytime its owner swings it, and can create 1/day a paralyzing gust of wind (working like the Web spell); in addition its user is constantly under the effects of the Levitate spell.

7 - Gravity Core
This massive +2 great sword deals 2d8 of damage, but the owner suffers a -4 penalty to hit rolls for its weight.

8 - Million Suns
This +2 long sword has a blade made of solid light, and it works like a Sun Blade.

9 - Sacrifar
This +3 long sword (dealing damage as a great sword) switches the character's alignment to Chaotic (until a Remove Curse spell is cast upon him) and forces its user to attack everybody within a 10 ft. radius; at the end of the combat the character need to rest in place for 1d4 turns.

10 - Rawelt
This +2 long sword works exactly like a Holy Avenger, but it grants also to non-paladins its +10 bonus to damage against Chaotic (or Evil in AD&D) creatures.
Pubblicato da Hamel™ a 16:03 3 commenti

After I've dropped several projects of mine, finally I've collected the House Rules I've used in Swords&Wizardry my science-fantasy campaign (but you can easily use them with Labyrinth Lord).

Basically that's what they do:

Straight from Tim Burton's TNBC, one of his biggest masterpieces.
Pubblicato da Hamel™ a 14:14 0 commenti 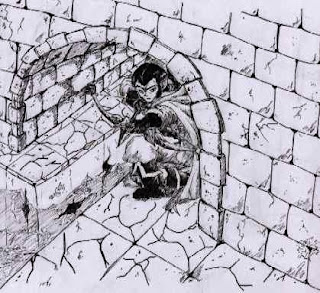 Stray Man (Thief)
Streets have no name, but a Stray Man knows them very well: grown up in narrow and unhealthy alleys he learned very soon how to survive in the real world, becoming a master of many skills. Stray Men move like cats on the city roofs, sneak unseen in the dark and know how and where to find the things they need; and they’re ready to steal them if they really want to.
Although not a talented fighter as a Brave Man is, a Stray Man can be very deadly in close range; living long enough to enlarge his experience, he can also try to use magic items usually crafted for Erudite Men like staves, scrolls or wands.
All the following are class features of the Stray Man.
Weapons and Armors: because a Stray Man needs to be agile, he can use no shield and wear no armor heavier than leather; he has a pretty wide selection of melee and ranged weapons, as long as they can be wielded with a single hand.
Thievery (Talent): a Stray Man owns an extraordinary manual ability and is very streetwise, thus a player can call a Talent Test whenever he wants his character to perform particular actions (like gathering gossips, deciphering secret codes, handling locks and mechanisms, acting in disguise, picking someone’s pockets and so on).
Stealth (Readiness): thanks to years spent as an outcast a Stray Man displays an incredible agility and awareness, so he can perform exclusive actions (like climbing sheer surfaces, slinking in the crowd, hiding in shadows while followed, sliding behind an enemy) others cannot do with a successful Readiness Test.
Play Judas: a Stray Man has a deep knowledge of anatomy, so whenever he stands behind an enemy he adds his Talent Modifier on his Combat roll, dealing the standard weapon damage and decreasing directly enemy’s Life Points by a specific amount (equal to 1 plus Stray Man’s HD).
Rascal (1st level Title): as Rascal a Stray Man can target with a Play Judas only creatures having a humanoid anatomy (humans, goblins, orcs, elves, dwarves and so on).
Knave (2nd level Title): as Knave anytime a Stray Man reaches a new populated place he becomes automatically richer by 5 gold pieces (plus 5 times the place’s Entity Rating in gold pieces).
Snatcher (4th level Title): as Snatcher a Stray Man can choose another creature type to be affected by his Play Judas.
Outlaw (8th level Title): as Outlaw a Stray Man can choose another creature type to be affected by his Play Judas; he can also understand magical scripts and use magic devices or scrolls (fixing the Entity Rating) with a successful Talent Test.
Master Thief (12th level Title): as Master Thief a Stray Man can choose another creature type to be affected by his Play Judas, and Life Points damage increases by an additional 1; in addition, he can found a Rogue Guild and attract a group of thugs and thieves working for him from now on.
P.S.: the artwork is a courtesy of the dwarvish friend Daryoon X.
Pubblicato da Hamel™ a 14:46 0 commenti

Roberto took the Hardest Gary Gygax Quiz in the World and got 60%!

You are a Gary Gygax Myrmidon. You are mighty in the ways of Gary Gygax. You're probably a First Edition or OD&D player, and I wouldn't be surprised if you had an original copy of the Chainmail rules.

Paladin Code: You completed this quiz without using Google.